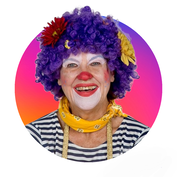 I was born at Maitland (South Australia) on a grain and sheep property about 100 miles west
of Adelaide. I am one of six children (the baby) and growing up I remember lots of eating and music as my mother loved to cook and my father was a self taught musician.

I later trained as a nurse at the Royal Adelaide Hospital. There were bad times and good times during this period - the good times being faintly reminiscent of my first visit to Selangor!  After this I did another nursing course in Brisbane where I met my husband,Sam - and we are still talking! We have three super kids and they in their turn have produced six delicious grandies for our entertainment.

Sam was in the Navy so we travelled all over Australia with two postings to Papua New Guinea then finally 20 years in Canberra. While Sam was having his own adventures at sea I was having my own 'watery' adventures on land. Over a period of ten years I had three incidents of nearly losing my car and myself in water. The first was where my car veered off into serious floodwater - luckily a rescue was at hand. The second time was when the car - without anyone in it this time fortunately -decided to run into the ocean. Again a knight in shining armour was there. The third time was when the brakes failed and I drove on to the front of my husband's ship when it was tied to the wharf. For this latter experience I was
dubbed a 'navigational hazard' in various Naval publications at the time!

Then came Canberra where I returned to working in a hospital after completing a horticultural course and when hospital work became too tedious did an Arts Degree at ANU I have always been interested in live theatre over the years and have attended same whenever possible but the nearest I have personally been involved is as a prompter for a series of One Act Plays at BATS and then appearing at two hospital revues - one as a blowfly
and another time as a nun! Not exactly riveting CV material for a Hollywood talent scout!

Clowning with its makeup and costume,singing ,jokes and magic has filled to a degree the urge to perform and being able to bring laughter and colour to groups of people is immensely satisfying. When a sweet lady at the end of an event holds your hand and says 'you've made my day' you know that you will sincerely reply and say 'and you've made mine too'.

Create your own unique website with customizable templates.
All members are with Blue Card status. Coastal Caring Clowns visits are free of charge